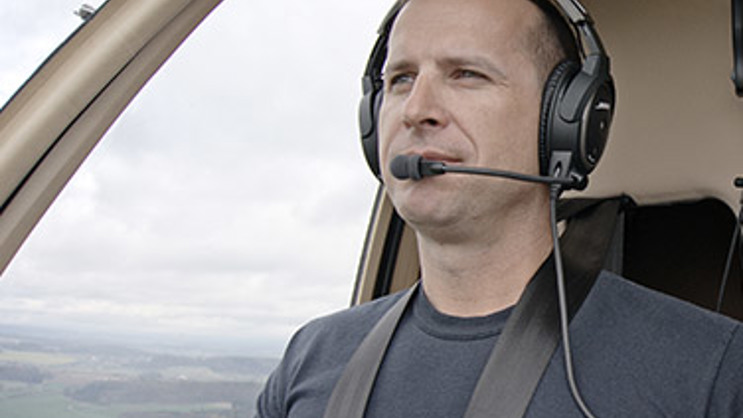 I had the opportunity to meet and fly in the Guimbal Cabri helicopter, and in the following text I will try to summarize my impressions from this meeting. The history of the development of this helicopter is very well described elsewhere and the technical parameters can be found on the website of the manufacturer or representative for the Czech Republic, the company LION Helicopters s.r.o. and therefore I will focus more on my perspective from the position of a pilot and flight instructor.

In my practice, I mostly encounter Robinson R22 and R44 helicopters, and in the recent past I had the pleasure of flying the Schweizer 300CB/CBi as well. So my thoughts on the Cabri had to be necessarily connected to the comparison of the mentioned types. I can state in advance that I was really impressed by the Cabri. Even at first glance, when comparing the R22, S300 and Cabri types, you can see a vast difference in the technologies used. The R22 is a classic representative of helicopters with a semi-rigid rotor (similar to, for example, the Bell 206 Jet Ranger) and the S300, on the other hand, is a typical case of a helicopter with an articulated rotor. Since one of the priorities in the development of the Cabri was to develop a helicopter suitable for pilot training, it is clear that the designer took a different path than Frank Robinson when he designed his R22 helicopter in the 1970s. The classic articulated rotor used on the S300 (a helicopter that was designed as a training helicopter from the beginning) is suitable for pilot training, but its design does not correspond to current trends towards simplicity, and the number of moving parts makes production more expensive and maintenance more demanding. Bruno Guimbal therefore kept the concept of a three-bladed rotor, but using his experience from working at Eurocopter, he gave his helicopter a rotor in which the bearings and lubricators were replaced by elastomers. In its construction, the rotor head is probably the closest to the EC120 helicopter (in the price category of 1.4 million dollars). The EC 120 was also inspired by the use of a fenestron-type compensating rotor. The greatest benefit of fenestron is its safety. At its operating speed, the classic balancing rotor is less visible to people moving around the helicopter, and their collision with it usually has tragic consequences. An exposed tail rotor is also more vulnerable in the event of a collision with, for example, a bird (or an object that has fallen out of the cabin) in flight, or an obstacle when maneuvering, for example, in a confined space. The rotor of the fenestron, which is protected, reduces these risks to a minimum. Unfortunately, the safety benefits obtained by using the fenestron are somewhat negated by the low-mounted rotor on the Guimbal. Mainly in the rotor spin-up and spin-down phases, the blades move relatively low above the ground. From my perspective as a pilot, the fenestron is probably the biggest feature of the Guimbal. Spoiled by the excellent balancing rotors of Robinson products, I was a little worried about the effectiveness of this system. These turned out to be odd in the end, and with the wind around 15-17kt and the helicopter rather close to the maximum take-off weight, I did not hit the pedal stop even during more dynamic maneuvers. What surprised me a little was the course of the "shot" of the fenestron. In some types of helicopters the pedals may be more sensitive and in others somewhat "blunt", however with a classic trim rotor the effect of the pedals is more or less linear. In the Guimbal Cabri fenestron, the pedals are rather blunt around the center and sharper in their effectiveness at the extreme positions. In practice, this means that when transitioning between flight modes where more significant performance changes are needed, the pilot must first overcome the less sensitive part of the pedal stroke and then adjust to the more sensitive pedal stroke in the extreme positions. At first I was surprised because I felt that the fenestron was reluctant to respond to my pedaling, but I just had to press the pedals harder and in the new mode they were almost as responsive as I am used to from other types. When transitioning into a hover, you can also notice the relatively strong pull of the fenestron, which tends to pull the entire helicopter to the left (the helicopter's rotor rotates clockwise). This effect is of course manifested in all helicopters and the pilot must compensate for this drift by moving the cyclic to the side (the direction depends on the orientation of the rotation of the main rotor). But with the Cabri, I had the impression that the lateral cycling is needed a little more than with the competitors. I attribute this to the unusually short tail spar, which makes the fenestron have to develop more thrust to compensate for the torque. Honza Krčil, the instructor and owner of the helicopter, quite aptly compared the cyclical movement required when transitioning to a hover to engaging the fifth gear in a car (to the right and forward). However, I got used to this unusual behavior for me quite quickly and soon my execution of maneuvers with a change in power looked more coordinated.

Another area in which the Guimbal Cabri goes with the times is the spacious cockpit, its arrangement and then the instrumentation itself. With my height of 186cm, I consider the R22 cockpit an ergonomic disaster and I definitely prefer the R44 cockpit, which I find very comfortable and in which I